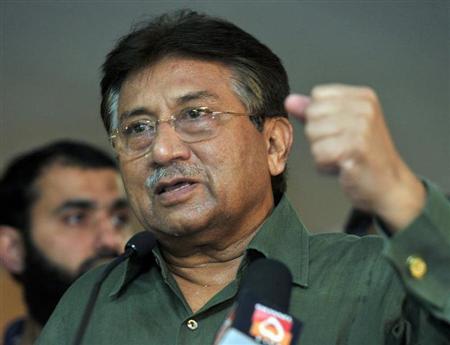 Musharraf will be temporarily confined to his farmhouse over security concerns and will be taken to the anti-terrorism court in Rawalpindi on Friday.

The ex-military ruler is already under house arrest after the High Court rejected his bail in the judges dismissal case.


According to PTI, FIA officials will interrogate the former president about sending a threatening email and a call to former premier Benazir Bhutto and failing to provide her with foolproof security.
Musharraf has been accused of security lapse despite repeated letters from Bhutto over security concerns.

"We will complete the challan (chargesheet) after investigating him by May 3 and submit the same in the anti-terrorism court."

Bilawal Bhutto Zardari, Bhutto's son, has blamed Musharraf time and gain for the assassination.
A 2010 United Nation report also stated that Bhutto's death could have been averted lest adequate security was provided by the Musharraf government.

The ex- military general is facing faces several court cases over crimes committed during his 1999-2008 tenure. He is also facing charges of imposing emergency rule in 2007 and for the death of Baloch leader Akbar Bugti.

Musharraf had returned to Pakistan in March after four years of self-exile in London to contest in the May 11 elections. He was barred from participating due to the criminal cases stacked against him.