The Chimera group has used the September 1st annular solar eclipse as a trigger to reopen a negative plasma portal through the Congo energy vortex. You can see that the path of totality for the eclipse goes through Congo: 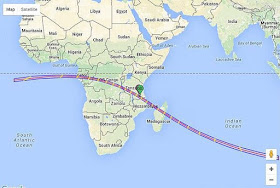 Exactly 67 minutes after the eclipse was over, the Chimera group has used a scalar beam weapon from one of their UAV craft to destroy Elon Musk's Falcon 9 in order to create a delay in the surface space programs that attempt to break the quarantine status for planet Earth:

Elon Musk is the visible representative of a certain positive SSP faction and in his latest statement he hinted at extraterrestrial involvement in Falcon 9 explosion. This was openly reported in Russian mainstream media:

Since September 1st 2016, which is the 77th anniversary of the beginning of WW 2, there is an open war going on within our Solar System between the Chimera and their Draco minions, and the positive Light Forces of the Central Race, the Galactic Confederation, the Pleiadian, Sirian and Andromedan fleet and positive SSP factions. This is the last escalation of the Galactic Wars before the final liberation of our Solar System and the final removal of darkness from the Universe.

One aspect of this war is the increased attacks towards the Lightworkers and Lightwarriors with scalar technology.

Because of this situation, in order to strengthen the Light grid on the surface of this planet, we will be doing two additional Weekly Ascension Meditations this month.

The first one, at the exact moment of the September 16th lunar eclipse at 6:54 pm UTC:

The second one, at the exact moment of the equinox on September 22th at 2:21 pm UTC:

The instructions for the meditation are here:

You can convert time for meditation from UTC to your local time zone here:

Victory of the Light!