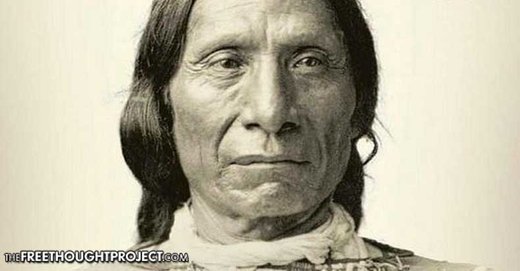 Columbus Day has rightly become the subject of disdain and sharp criticism given the altogether ridiculous idea he "discovered" a land already inhabited for aeons and wrought genocide against its population.

Peoples indigenous to that land have since been forced to battle an equally brutal government for the right to simply exist. Centuries of exploitation and genocide have corralled these original inhabitants into (in many cases) arbitrary areas politely termed "reservations" — but are decidedly more akin to 1930s German ghettos.

And the government of these so-called 'United' States still continues its exploitation, as in its surreptitious alignment with Big Oil to allow construction of the Dakota Access Pipeline which will likely contaminate the Standing Rock Sioux' drinking water — and that of some 18 million people, all told.

Thanks for nothing, Columbus.

But in light of the stark reality of the conqueror's brutal legacy, a few shining moments of resistance evidence the power of the indigenous to quash governmental usurpation — as is the innate right of humans anywhere.
Continue Reading at ...... https://www.sott.net/article/330714-Celebrate-Columbus-Day-by-remembering-the-only-Native-American-to-defeat-the-Federal-government-in-war
enerchi at 10/10/2016 11:54:00 PM
Share
‹
›
Home
View web version