The Nazi Moon Base 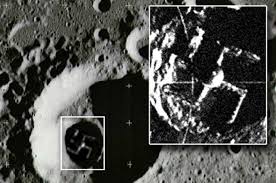 The Nazis were a corporation that excelled in the creation of technologies especially anti-gravity machines. They began their process of taking over the German government with the appointment of Adolf Hitler as half chancellor of Germany in 1933.

As the Panzer divisions lines fell at the Battle of the Bulge in January of 1945, the Nazi leadership began the process of fleeing Germany.

They then went on to consolidate power over the U.S. government by a famous UFO sighting over the White House in the 1950s.

The U.S. government brought ex-Nazis to the United States through project Bluebeam. These Nazis mostly worked in rocket propulsion technologies in surface facilities. The Nazis secret technological programs were carried out underground.

This faction was able to reach orbit by 1945. As the Germans chances of winning WWII began to collapse around them, the corporate underground Nazis graduated to breakaway civilization and fled Germany. They went on to develop a moon base.

In the 1970s the Nazi faction declared war on the Draco Federation and their orbit fleet was completely destroyed as well as their moon facilities.